Take Me to the ‘Red and Brown Water’ 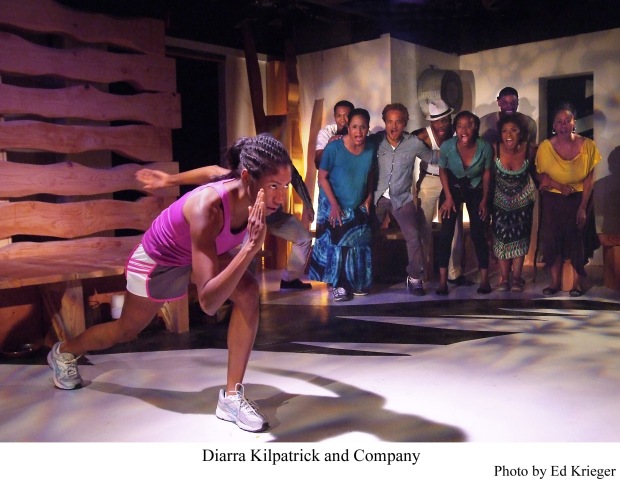 Kinetic energy charged with emotion. That describes Tarell Alvin McCraney’s Los Angeles premiere of In the Red and Brown Water presented by The Fountain Theater. The location of this acclaimed, vibrant, nonprofit performance space in a humble Los Angeles neighborhood foreshadows the economic reality of the play’s kaleidoscopic mix of characters traversing the stage. In this context, McCraney’s play represents a microcosm of shattered dreams and unrealized potential within the larger world.

Treading In the Brown and Red Water, the audience descends into the protagonist’s depths. Set in an impoverished section of the fictional San Pere, Louisiana, Diarra Kilpatrick’s Oya is a passionate runner who abandons a college track scholarship to take care of her dying mother, Mama Mojo, played by Peggy A. Blow. In the process of losing her dreams, she escapes into a fiery relationship with Gilbert Glenn Brown’s Shango and relinquishes the one man, Ogun, who declares his heartfelt love. As Ogun, Dorian Christian Baucum exudes an honest, inner-strength that contrasts with Shango’s impulsive personality.

On a superficial level, the plot reads formulaic: Tragedy hits girl. Girl turns to wrong man. Girl finds herself alone. However, McCraney’s vision is anything but banal. The onstage interactions between Oya and the characters with Yoruba deity names evoke the transcendental belief that spirits interact with humans in the everyday world. Through Oya’s relationships, the audience begins to explore not just socio-economic realities, but the human desire to survive. Simultaneously visceral and intellectual, this “circular” ode to human spirit emerges then concludes in similar yet distinct ways.

Peeling away In the Red and Brown Water’s stratum is akin to unraveling textual and historical layers of a Sorrow Song. Within this context, McCraney’s drama illustrates civil rights activist W.E.B Du Bois’ analysis of slave songs as “the music of unhappy people, of the children of disappointment [which] tell of death and suffering and unvoiced longing toward a truer world, of misty wonderings and hidden ways.” Through the allusion to Yoruba deities, McCraney echoes aspects of African American culture that used to remain hidden. His knowledge of Yoruba Diaspora adds to the dialogue of African American art.

While prominent art historians, such as Robert Ferris Thompson, have examined the spiritual and practical aspects of West African culture brought to the Americas through the slave trade, In the Red and Brown Water pushes beyond enumerating bodies of work which focus on elevating African American folk art from obscurity to cultural center. McCraney indirectly asks: Why stop there? He bridges the aesthetic, spiritual and socio-political gap that encompasses not just race, gender, class and sexual identity, but – most importantly – the psychological self, the whole self affected by poverty onset by institutionalized human bondage.

During the ensemble’s performance, parallels between In the Red and Brown Water and choreographer Alvin Ailey’s Revelations arise. Known for drawing on the emotional and spiritual experience of African Americans rooted within a rich musical tradition, Ailey, who McCraney cites as one of his influences, connected the past to the present. Traces of Ailey’s influence emerge as drumbeats pulsate through the heart of the play, interweaving through spiritual scores and contemporary beats. The connection between past and present compounds in an agonizing scene. In the midst of electronic house music, Oya breaks down. Tapping into her primal emotions, she ruptures into African dance, which emphasizes the beauty of African American culture ingrained within the realities of personal struggle.

Shirley Jo Finney’s discerning direction coalesces the multidisciplinary facets of Peter Bayne’s talents as composer/sound designer and Ameenah Kaplan’s choreography to evoke the presence of Yoruba culture within a contemporary play. Although Frederica Nascimento’s minimalist set appears stark, she places attention on every detail: From what resembles a divination bowl sitting under the porch to the assorted water vessels on stage. Even the plastic water bottle turned percussion instrument summons the spirit of San Pere. In the Red and Brown Water conjures ancestral spirit as literal, figurative and mystical dreams appear.

In the Red and Brown Water
by Tarell Alvin McCraney

← Attention Dog Lovers: Don’t Miss ‘The Misadventures of Rick the Strangler’ or Rick and Amos Might Just Come Find You!
Zombies 101: Lifesaving Tips Abound in Theater Asylum’s ‘How to Survive a Zombie Apocaplypse’ →