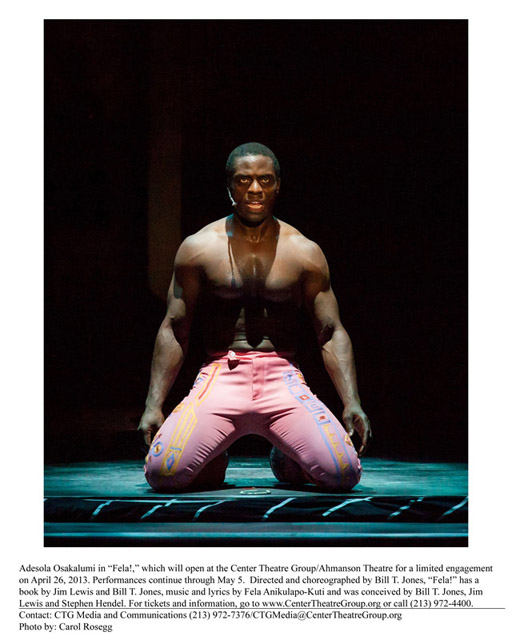 The band starts playing. The dancers start grooving. The audience mingles in and out of seats waiting for the main event. Enter Fela like a prizefighter parading through the audience. Finally, everyone settles. And the production explodes.

Do you feel safe? Fela Anikupalo-Kuti, played by Adesola Osakalumi, asks the audience. The audience answers, “Yes!” He repeats the question. Do you feel safe? Where does the audience feel safe? In their seats at the Ahmanson? In downtown Los Angeles? In the United States? In the world? Or in 1978 Lagos, Nigeria at the Shrine, where Fela! is set? By the end of the musical, perhaps some of the “yeses” will change.

Fela! tracks the life of Fela Kuti: The father of Afrobeat, the son of feminist Funmilayo Ransome Kuti (Melanie Marshall) who was murdered by his political oppressors, and the husband of twenty-seven wives. Osakalumi’s Fela is human and engaging. Not a mythicized musical idol whose legacy lives on through enigma, rather a person who yearned to empower the Nigerian people through music. In pidgin, he asks the audience, “How many have you been to jail?” A handful of hands raise. “Who here has been put in handcuffs? Was it at the police station?” The audience laughs at the implied joke. He lights a joint. Someone in the audience wants it passed. “Pass it? Next time don’t be so cheap. Sit in the front row.”

Nice introduction to Expensive Shit, a song that references when the Nigerian police tried to plant marijuana on him. He ate it from the policeman’s hand. For days, he held in his poop, while officials waited for him to crap. Through mixing overt humor with ironic subtleties surrounding the serious politics of Fela’s arrest, the audience does not disappear into despair. The performance’s wit parallels Fela’s celebratory beats, while the message speaks reality. 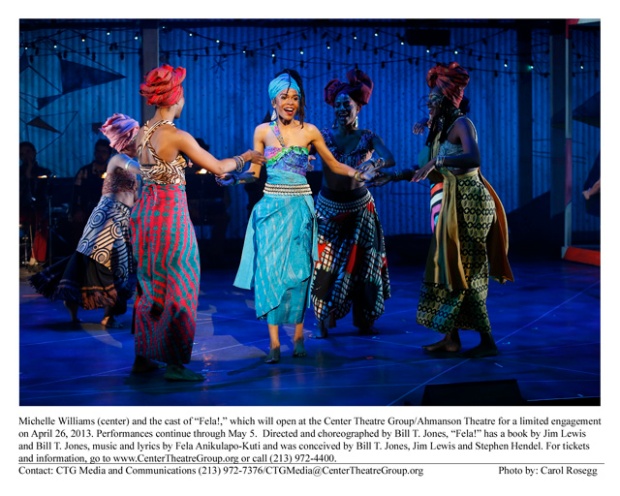 The female dancers – who represent Fela’s wives- counterbalance the virile, male presence on stage. Their energetic athleticism hypnotizes the audience as their costumes gyrate to the layers of beats. From one musical score to the next, I found myself captivated and pulled into the whirlwind of musical currents. The repertoire of Fela’s work illustrates the guts he had to outreach political and musical limitations, the power he had to bring people together, and the acknowledgement that women influenced his life. The duet between Funmilayo and Fela is powerful. Marshall’s soulful voice breaks the audience from fervent intensity, while her character buttresses Fela’s strength to fight. Sandra Isadore (Michelle Williams) introduces Fela to writers and activists such as Angela Davis and Malcolm X. These were the women who fueled Fela’s political vision to see the connection between colonialism, capitalism and Nigerian politics. At times, I wished that Williams brought more fire to her role. Working with a powerhouse cast should have fueled her intensity. Her soft femininity seemed underwhelming compared to the rest of the company, even her character’s political ideologies.

As choreographer and director, Bill T. Jones combines politics, historicity and musicology with attainable immediacy.  With Fela!, Jones brings this revolutionary passion to a mainstream stage and larger audience who might be unfamiliar with his work. Back in 2007, George W. Bush increased the number of troops sent to Iraq. I saw Bill T. Jones/Arnie Zane Dance Company’s Blind Date at UCLA’s Royce Hall.  The impressive power and weight of this work stuck with me, because it propelled me to think about my role in the world.  Jones became my philosophical hero bringing to life existential questions. What does it mean to be human? How is humanity defined by war, jingoism and religious fundamentalism? There is no answer. Jones does not water down the potency of his artistic vision and intellectualism.

With the last scene, B.Y.O.C. (Bring Your Own Coffin), the audience should no longer feel safe. When Fela carries his mother’s coffin to the capital, he tells everyone to bring theirs. Dancers carry caskets through the audience and along the stage. They bear the names of ENRON, AIG, Halliburton, BP and Monsanto. Now, Do you feel safe?

But of course, a musical cannot end on that note. So, it concludes with Kere Kay. The words from the title repeat several times as drumbeats emphasize each syllable. The rapture of the final set is a call to revolt. And, the audience gets up to join the dance.

Fela! is the big party you want to invite everyone to and experience the second time. After leaving, it’s as if the preservance of a single person’s resolution can change the world.  Through Fela, it did.

This is the perfect musical for those who hate – or dislike the idea – of musicals.  Fela! is more like an experiential journey, even a one-man show.  The line between nonfiction and fiction blurs as the audience dances, responds and interacts with the performers on stage. There is no “Somewhere Over The Rainbow.” No chasing some unrealistic or unfulfilled dream. There is no pot of gold. The colonialists took that away. It is now, here, on stage and splatters reality along the aluminum paneling where the green, yellow and red of the African flag intermingle with deity images.

← Three Emerging Writers in Conversation about the 2013 LA Times Festival of Books
Ah, the Majestic Gazellas →