I first saw Lucha Vavoom back in 2007 at The Mayan Theater in Downtown Los Angeles – home to many a salsa night and, once,a clandestine home to a goth club or two. I was lucky enough to be present at the birth of the Lil Chicken, a “mini” wrestler who went on to help the Crazy Chickens defeat whichever rudo crew they were up against.

I didn’t grow up with Lucha Libre in the house. Not really. I’d seen glimpses of it here and there during commercials when my grandparents watched Siempre en Domingo.  I was more familiar with the WWF of the 80s – Hulk Hogan, Ricky “The Dragon” Steamboat, Junkyard Dog and the like – though I still didn’t watch it all that much. What I did watch pretty religiously was G.L.O.W. (Gorgeous Ladies of Wrestling), which gave me a basic introduction to the wrestling theater world:

– There is a good team and a bad team
– The good team will never do anything sneaky. The bad team always will.
– Everyone has a history with someone else, some long standing beef with their very own arch-nemesis.

What I didn’t quite grasp when I was a single digit kid was that it was all fake. Theatrics! Showmanship! Staged for your pleasure!

I certainly was not aware of the deep-seeded roots Lucha had in Latin American culture. So, when I went to Lucha VaVoom for the first time, I had a vague idea of what to expect, but was completely blown away.

Lucha VaVoom, The Production, has a subtitle: Sexo y Violencia. The “Sexo” refers to the striptease burlesque dancers that perform between matches. These “Buxoticas” are culled from all over the world, each with their own gimmick: 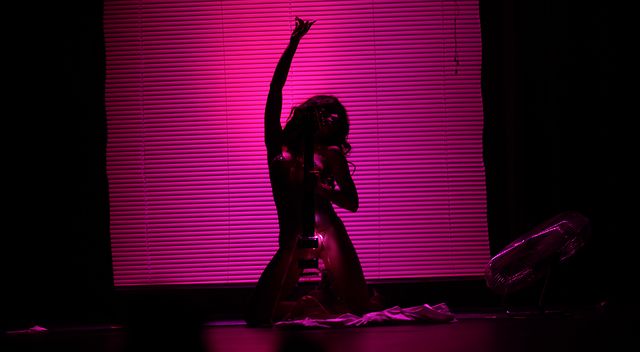 You know, a gimmick!

The “Violencia,” of course, refers to the mighty mighty luchadores, whose committment to a gimmick is just as strong as the buxoticas:

The ever tasty and tasteful Dirty Sanchez:

And then there is the one and only Queen of the Ring, Cassandro:

Current NWA World Welterweight Champion, he is a veritable amalgam of what ultimately makes Lucha VaVoom what it is; he is the sexo y la violencia. He wears long, be-sequined, fabulous capes that rival Liberace’s fantastic gaudiness. The song he walks into is “No te Metas Con Mi Cucu” and of course it is. There’s the prancing, the flirting with the crowd, the pausing to absorb the adoring roars from the audience – and we do roar! Not just because his gimmick – that of a campy send up of macho culture, an Exótico – is by far and away the most delightfully absurd thing I have ever seen, but because he is truly an amazing athlete. There is a reason that he headlines, and the crowd absolutely knows it. While some of the other wrestlers are in various degrees of training and experience, Cassandro, and his opponents are fierce acrobatic performers. Their aerial moves are breathtaking.

And now that I’m in the third decade of my double digits, I can absolutely see that it’s all fake, and that it’s all beautifully choreographed. As someone with a theater background, I think about the hours and hours of rehearsal and training – for both the wrestlers and buxoticas – that it takes to put on a production like this. It’s a performative spectacle that has been in existence for 10 years and shows no signs of fading away. Being an LA Native, I’d like to think that this combination of Mexican culture and Hollywood hotties couldn’t have been born anywhere else. In fact, I do. Because LA knows about being a big hot mezcla.

Lucha Vavoom comes home to Los Angeles thrice a year – for Valentine’s Day, Cinco de Mayo, and for the Halloween/Dia de los Muertos season. Halloween marks the last of their LA shows for 2013.

← Local LA playwright Liz Femi’s “Take Me To The Poor House” Heads to New York
The Casting of a Play: Reflecting Community Diversity on Stage for the Audience →