Nothing Lost in Translation in ‘Agua a Cucharadas’ 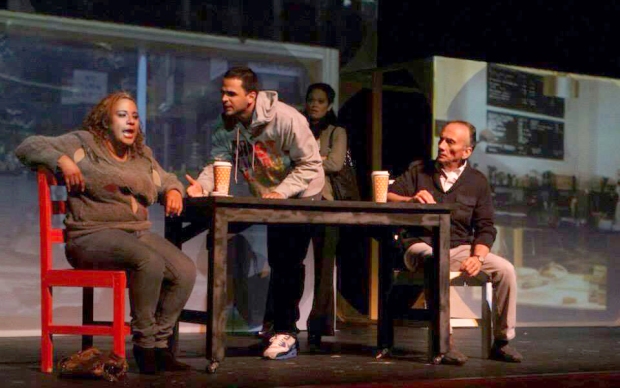 There is an natural, emotional urgency to the cadence of Tantai Teatro’s entertaining production of Agua a Cucharadas, a Spanish translation of Quiara Alegría Hudes’ Pulitzer Prize winning, Water by the Spoonful, now playing at LATC as part of Encuentro 2014.  This urgency permeates the story which interweaves the lives of six people, each actively slugging through various degrees of personal trauma – some physical, some emotional, some both. It is a daunting task, but in the case of this engrossing production there is  resolution for each of these characters  who are played well and honestly by a talented ensemble of actors with some serious game.

The story follows Eliot, an Iraq War veteran and his cousin Yaz, a music professor  at Swarthmore College in Pennsylvania. Eliot battles with the physical and psychological wounds from his tour of duty in Iraq. He is also primary caretaker for the family matriarch, his aunt Mami Ginny, who is terminally ill. He struggles with the emotionally taxing and life-disrupting effects on primary caretakers, while simultaneously searching for  empathetic balance and generosity with his own trauma. He is haunted by ghostly apparitions, specters from his time in Iraq. Yaz is in the painful process of divorcing her husband and is also struggling to balance personal and family trauma. Eliot and Yaz share a love and loyalty to Aunt Ginny who helped raise them. They survived childhood tumult under Ginny’s wing, and are each other’s rock through difficult times.

We also follow the online happenings of a support chat room for recovering crack addicts. They are a rambunctious crew, moderated by Mama Haiku who struggles to keep things positive and friendly. Manantial is the latest member of the group, who still periodically falls off the wagon. His presence is the cause of much tension within the group. When Fountainhead and Mama Haiku meet in real life, as do Chutes & Ladders and Orangutan, the cyber-boundaries and anonymity they all once enjoyed quickly deteriorate.  Orangutan, Chutes & Ladders, and Manantial (Fountainhead),were originally written as Japanese, African-American and white characters, respectively, in the English version of this story. This seamless adaptation in casting from the original work effectively argues the belief that the Latin@ Experience in this country is a key and undeniable element of the “American Experience” and that these character’s struggles could belong to anyone living in this country today.

There is a lot happening in Agua a Cucharadas and director Ismanuel Rodriguez paces it all extremely well and utilizes Wendel Agosto’s scene design to effectively  transport us through the play’s various settings. Five cubes are employed to compartmentalize the characters and their performance area, creating a visual reference to track all the storylines and their relation to one another. Projections onto the thinly veiled cubes establish locations as diverse as cyberspace, Pennsylvania, Japan and Puerto Rico.

Tantai Teatro’s production not only succeeds on its artistic merit, it is also well- situated within the framework of Encuentro 2014. The festival in part hopes to challenge conventional portrayals of Latinas and Latinos in the media and to highlight Latin@ theatre within the context of American theater. By placing Puerto Rican characters in situations which anyone can become entangled, and showing the characters  struggle through them in their native language, Agua a Cucharadas accomplishes these goals in an elegant manner. It tells the story of a Puerto Rican family in the United States without ever hitting us over the head with that fact. In doing so, it also challenges all outdated notions which pigeonhole Latinas and Latinos as outliers  operating within present day America.

← Dancing in my Cockroach Killers Will Make You Shake Your Booty Like Iris Chacon!
Performing Ayotzinapa in Los Angeles: Evaluating our Proximity to Mexico’s Violence and Corruption →